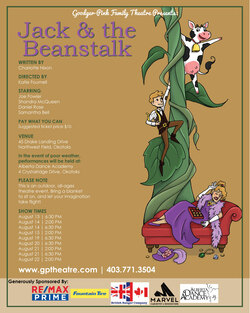 Goodger-Pink Family Theatre Proudly Presents...
JACK & THE BEANSTALK
by Charlotte Nixon
Betsy, the cow from "Jack and the Beanstalk", hijacks the original story and retells it from her "udderly" ridiculous perspective. Betsy is sold at the market to a wondrous wizard for three magic beans. Soon she discovers her own mystic medium tendencies and takes her act on the road. Meanwhile, Jack's over the top mother is on a spending spree, buying up half of the English countryside and everything in it! In order to keep up, Jack climbs the beanstalk in search of riches. What starts out as an innocent little "borrow" of funds turns into a race against time and giant! Can Jack and his new found friends Anzo, Gabbi and Harper make it down the beanstalk before the giant gets wind of their thieving ways? Will Jack spring his mom from the clutches of the Repo Man? Who could single-handedly save every single character in the play and still look absolutely flawless? Betsy: The Divine Bovine, of course!
Come join Goodger-Pink Family Theatre for some LIVE IN PERSON all ages outdoor theatre magic with Jack and the Beanstalk!

Tickets:
Pay What You Can
Suggested Ticket Price $10